Motivation – what drives you? 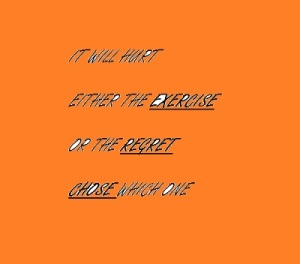 So you’ve decided to get in shape. Maybe you’re already exercising but would like to be more consistent. Or maybe you’re starting from scratch after a long break. Your problem seems to be motivation. When it comes down to it, you procrastinate and it just doesn’t happen.

The thing is, it’s not that you don’t want it enough. It’s a matter of planning. It will not just “happen” – there needs to be a clear plan in place, a way to measure it, and a way to execute it.
As I’m not an expert but only a regular person training for a 100 km run, all I can do is share what works for me and hopefully something will resonate with you.

I’ll share a little secret with you first: when I originally took on triathlons in 2009, I had never swam a lap in my life, never been on a road bike and I hated running. Hence, triathlon was a perfect fit (insert sarcasm here). I was, however, motivated to conquer a challenge and all three sports were exactly that. In addition, I wanted to compete in Ironman. How naïve of somebody who had never swam a lap in her life! I’ve completed two Ironmans since then.

Since I don’t have a natural love for the sport, I have to use “tricks”. What I’m excited about is not the running in itself like some people but the feeling of accomplishment.

What is that driving force for you? What did you want to accomplish with your exercise?

Keep that goal in mind and now let’s see how we can trick ourselves into just “getting it done”.

1. Plan the EXACT time you will go running – even if you don’t feel like running, at least keep the appointment with yourself by saying “worst case scenario, I’ll just walk”; hint: chances are, you’ll probably start to run anyway once you get out the door but don’t tell your mind that 🙂

2. Make sure you don’t eat too close to exercise. Nothing can put a damper on your run than an overly full stomach. A rule of thumb is eating at least 2 hours before exercise.

3. Get enough sleep. You need at least 8 hours of sleep a night if you’re exercising.

5. Track what you’ve accomplished for the week. Buy a GPS watch, download a running app on your phone or try to estimate what distance you’re running and keep track of it every workout.

6. Find somebody you trust to keep you accountable every week. Send them your goals and a report of your running every week and ask them to keep “score”. Studies have shown that people who report to a supportive friend every week are much more likely to succeed in accomplishing their goals.

What other ways do YOU like to motivate yourself? What drives YOU?
Please let me know by leaving a reply below.

Andrea Kladar is the founder of the 100 FOR 100 Movement who led by example and ran 100 km to save 100 animals in 2013 placing first for women under 40 in the Canadian National Trail Championships and raising over $14,000 for charity. Andrea is not a professional athlete. She is a war refugee. She is a daughter, spouse and friend. She is a godmother and philanthropist. She is vegan and a finance professional who lives in Calgary, Canada. If Andrea can take on this challenge, so can you! Join the 100 FOR 100 Movement today!! Go to www.100for100.me to sign up now
View all posts by Andrea Kladar →
This entry was posted in Training. Bookmark the permalink.

4 Responses to Motivation – what drives you?